Weekly reviews are where I aggregate the best of my week. My goal is to make my information consumption more active, while sharing interesting ideas, articles, podcasts, and videos with others.

I still haven't figured out how to add blockquotes, so you'll see some large quotes as bullet points for now. However, I did add a table of contents - so that's cool.

If you like this, you can find my review for last week here.

This week, I stumbled into [[A Big Little Idea Called Legibility]] by [[Venkatesh Rao]].

In this piece, Venkatesh summarizes the book [[Seeing like a State: How Certain Schemes to Improve the Human Condition Have Failed]], which, in part, examines our propensity to project our own lack of comprehension of a subject or thing, to irrationality of the thing, instead of our own limitations in understanding the thing. In other words, people conclude that their lack of ability to understand a complex thing (like a city) is because it is irrational (often wrong). This results in fantastical failures. Take, for example, [[Things You Should Never Do, Part 1]] (Venkatesh also references this idea at the bottom of the article). Programmers are particularly suited to fall into this trap. We love to talk about how much better we could make a project, if only we could build it from scratch. Often, this is flat out wrong. We ignore the hidden complexities that made the current project such a mess in the first place. For large projects, this mistake is deadly. This problem is even worse when talking about multi-year infrastructure problems, like cities.

Earlier this week, I tweeted an image illustrating the difference between how I think about complex and complicated concepts: 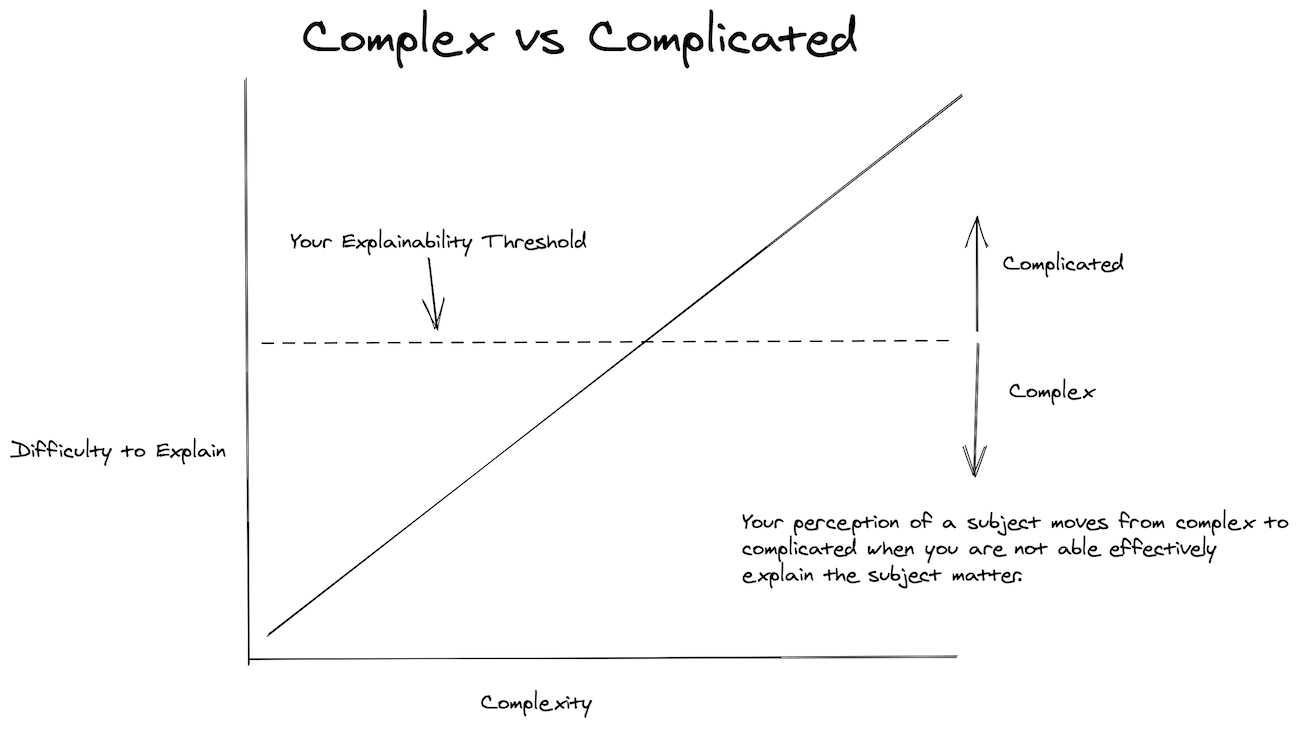 What Venkatesh describes in his summary is when someone, or a group of people, decide that a very complex thing is unnecessarily above their explainability threshold. When they can't effectively explain how the current thing operates, they decide it's because the thing is irrational. Then they attempt to replicate it at a lower complexity - under their explainabilty threshold. This constraint is part of what leads to the ultimate failure of these projects.

The driving force behind this is "the mistaken assumption that thriving, successful and functional realities must necessarily be legible. Or at least more legible to the all-seeing statist eye in the sky (many of the pictures in the book are literally aerial views) than to the local, embedded, eye on the ground." This happens, in part, because "Complex realities turn this logic on its head; it is easier to comprehend the whole by walking among the trees, absorbing the gestalt, and becoming a holographic/fractal part of the forest, than by hovering above it."

We should all be aware of our own explainability thresholds when speaking on complex subjects or projects.

Here's how the wikipedia page for complexity describes the difference:

If complicated is simply the "opposite of simple," then surely some thing are complicated. However, taking a look at the definition of simple, which is "easy to understand," we see that this definition is relative. Physics is easy to understand for a college professor, but impossibly hard for many 10 year olds. I like to think this can be ascribed to a difference in explainability thresholds. I'll leave that up to you for now.

Notes on [[The Power Paradox]]

For any of you who would like to read [[The Power Paradox]] without actually reading it, check out my notes page

Article of the Week

[[No Meetings, No Deadlines, No Full-Time Employees]]

[[Sahil Lavingia]] gives an in-depth look into the unorthodox way he runs [[Gumroad]] - described as "Freedom at all Costs."

The company is based around flexibility for everyone, not just Sahil. When a new person joins, they "go into our Notion queue, pick a task, and get to work, asking for clarification when needed." They even prioritize by "what’s fun or rely on their intuition because as long as we remain profitable and keep shipping, we tend to get to the important stuff eventually."

Because there are no meetings or videos calls - ever - the entire company revolves around writing. Sahil describes it as "working on an open source project like Rails. Except it’s neither open source, nor unpaid."

They do this for all development - big and small, engineering and creative. They shipped Gumroad memberships, a huge product, without a single meeting or video call.

Of course, this is not for everyone, but it does prove it's viable for a specific subset of people/companies. Sahil explicitly describes the trade offs: "There are no retreats planned, and no social channels in Slack. There are limited opportunities for growth. And we can’t compete with the comp packages that big tech companies can provide... But we can compete – and win – on flexibility."

It's up to the contracted employees how much they work, but it's also up to them how they are going to handle their own healthcare, so it's a huge trade.

I bet more companies are going to take inspiration from this model. After all, [[The New American Dream]] is just to escape the 9 to 5. Companies like this allow all employees to escape at their own comfort level, not just the founders.

Thanks to [[Jeremy Tuttle]] for sending me this video. This trainer used to work with Lance Armstrong, and even though this video is only 12 minutes, it is no joke. The first comment on youtube says it all:

"Thank you GOD FOR REUPLOADING THIS."

I found a few cool personal websites from replies to a tweet that I forgot to like and didn't save. These make this site look really boring. Maybe one day I'll take some inspiration and spruce it up.

Another week spent procrastinating the year-end review I've been talking about. I decided today that I'm going to start backwards - establish my goals, then look back through all my notes to figure out why I think they are the right ones. This will hopefully make it easier for me to decide what to include.

If you liked these notes, hit me on Twitter!